once you become a b/wearer

finally, your awareness of the psycho-physiological interactions in a social setting has been raised and cellipus becomes redundant

the product designed is the experience elicited, not so much its physical appearance

cellipus is a liminal object:
not part of you
nor part of your environment
but somewhere inbetween

cellipus is not:
a gadget
jewelery
a garment

ambient media reside in the background or perifery of our attention,
we focus on them when they behave out of the ordinary

corporal literacy describes the abilities of the body to perceive, read and make sense of ourselves in relation to the world around us

this has given rise to unusable, frustrating and rude products

in my opinion this reflects the dominance of reason in western (capitalist, modernist) society:
non-rational elements of the human psyche and resulting behaviour are deemed inferior to logic and reason

most media we use (e.g. telephone, mail, e-mail, chat, videoconference...) support the exchange of intentional, verbal information,
but have low bandwidth with regard to the subtle sides of human interaction

most current media support 1-on-1 interactions

some recent developments look into amending those shortcomings

however, so far no integral approach was encountered

a human centered, context oriented approach to media development may enrich our experience of social life and help to (re-)discover stimulating aspects of our interactions. 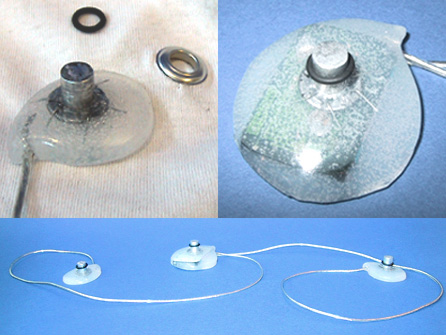 sits against the skin

vibrates with every heartbeat

forms a channel of social biofeedback 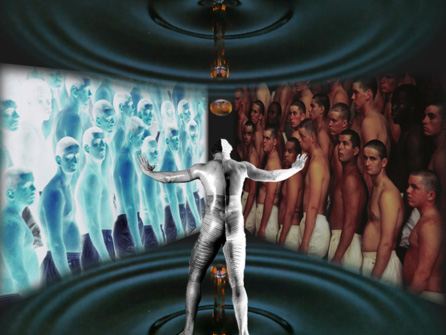 core of group interactions seems to be affective

stimuli from our environment are automatically appraised and evaluated

appraisal mechanisms are to some extent present at birth,
but also we can learn to attach new meanings to stimuli through experience 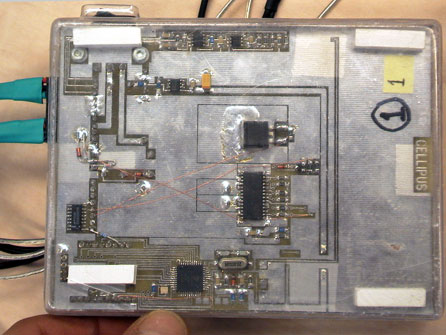 the design is part of a process of research through design

the product/system designed poses theses and questions, e.g.:
to what extent do people attach meaning to the new stimuli?
what meaning is attached?
what influence does the introduction of the system have on group dynamics?
...

in order to test the theses and iterate in the process of research through design, functioning prototypes were built

combines heartbeat and maps these to a vibrating device

combines HRV values and maps a function of these to a peltierjunction element, which changes temperature

the visceral communication device has no buttons

the product interacts with its b/wearer autonomously

vibration, through an electro-mechanical device such as a pager-motor

temperature changes, through a peltier junction element which pumps heat from one face to another when current flows through it

our tactile senses are more sensitive in certain areas

microcontroller:
cygnal 22Mhz uC with 2 onboard 10-bit A/D conversion around a 8051 core

thus only individual feedback was established

the second set of prototypes was developed around two pic18F16xx microcontrollers, one for local processing and one for communications

development of this system halted at the same stage as system v.1b, seperately communication and local processing work, but not simultaneously

users wore the prototypes for < 1 hour

if feedback is stable, the signals move to periphery of attention

people notice a connection between feedback and their arousal

feedback is experienced as very personal, and when it stops (unstability) worry is expressed

cellipus is seen as a being/entity, not a thing, unless it is unstable

communication between prototypes was not established

some users report:
feedback moves between periphery and focus of attention depending on level of variance in signal

feedback was reported as 'in some way' related to emotion

feedback was reported to seem to be coming from other test subjects (even though no communication was not established!)